In the late eighties and nineties, Odense had a very active metal scene with bands, magazines and record companies. Odense Metalfest will once again make Odense the gathering point for metal music in the middle of Denmark.

Bands like Prophets of Doom, Sliced Pimples and Rigid Domain was the center of the metal community and represented Odense in Denmark in the late eighties and early nineties. When Progress Magazine, which dealt with metal music and tattoos, saw the light of day, it was a no brainer that the record company Die Hard Music was founded. The company released both Danish and foreign metal bands and established a record store in Vindegade in Odense which became the focal point for metal fans on Funen.

This meant that welknown, foreign bands such as Dark Angel, Nuclear Assault, Mayhem, Cradle of Filth, Deicide, Macabre, Entombed and many more made their way to Odense when they were on tour. Since then it have been more seldom to see major death and thrash metal bands in Odense. They often play Aarhus or Copenhagen instead.

This will be changed with Odense Metalfest – a two-day festival – which will be a catalyst and also provide opportunities for local bands to play live. Odense Metalfest will feature bands from Sweden, Hungary, the Netherlands and of course Denmark. The most influential extreme metal bands from Odense are represented, and in addition, legendary, foreign death metal bands will headline the festival. The festival pays homage to the genres death, hardcore and thrash metal and there will also be active tattooists working at the venue.

“Now it is! Other major cities in Denmark have hosted successful metal festivals for years. I have always thought about it. Odense, as the third largest city in Denmark, does not have a festival for the extreme metal genres such as thrash, death metal and hardcore. Aalborg, Copenhagen and Aarhus have long had metal festivals that present big, foreign main names. Odense must be represented as well”, says Jakob Schultz, spokesman for the festival which he organizes together with Odense-based Martin Lyager from metalkalender.dk and former editor of danishmetal.dk, Morten Nissen based in Esbjerg, and owner of PR company Trechoma and one of the creators of the Death Coast festival and Michael H. Andersen, who has released dozens of rock and metal releases for almost 30 years, organized several festivals and since 2003 has run one of the largest independent, Danish music companies, Target Group.

The 4 organizers have the metal genre in their blood since their teens and have all been a part of the scene as both journalists, musicians and distributors.
Jakob Schultz is originally from the Esbjerg area, where he was the guitarplayer in one of Denmark’s most renowned death-thrash metal bands, Invocator, and the death metal band Maceration. In the late eighties and early nineties he helped build a large death and thrash metal scene, where he got the biggest, foreign death and thrash bands to Esbjerg. In addition, he was co-founder and editor of Denmark’s largest metal magazine Metalized.

A lot is happening in the underground in Odense today, which is centered around the rehearsal rooms in Kansas City, and there are also a number of underground concerts arranged by local associations and enthusiasts at both Posten, Momentum and Kansas City.

Odense Metalfest must also be an inspiration for young musicians and that there is a community where they are welcome and can network. Posten also has an ambition to promote the diversity of the music scene in Odense, just as it is the case for Metal Mekka, Baahl Fest, Ilter and Kansas City which Odense Metalfest also collaborates with. In addition, there is a collaboration with the annual Odense HCA INK – HC Andersen Tattoo Festival for the tattoo part, where local tattooists will work at Odense Metalfest and make tattoos on the audience both days. There will be a lot of flash designs that fit perfectly with the metal genre. 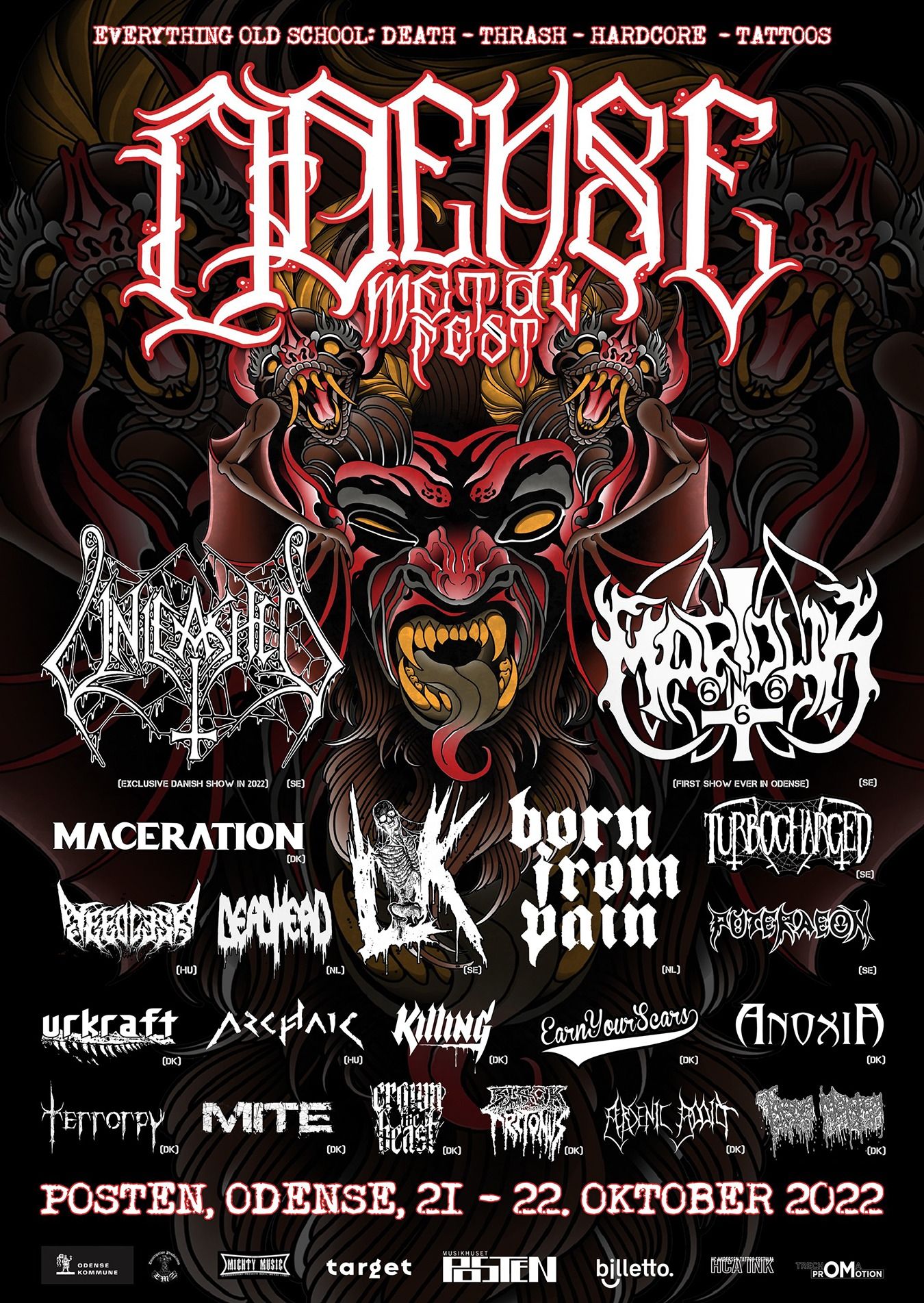